The version used for this installation manual was Boxer 1.3 (May 2012). Open the Boxer.app program. The first time you run it, a directory called "DOS Games" will be installed in your home directory. This is the default location for the SCORE 4 installation in the next section although the SCORE installation may be moved anywhere else after it has been created.

Setting up SCORE 4 in Boxer.app

To install SCORE 4 in Boxer.app, start Boxer. A welcome screen will appear: 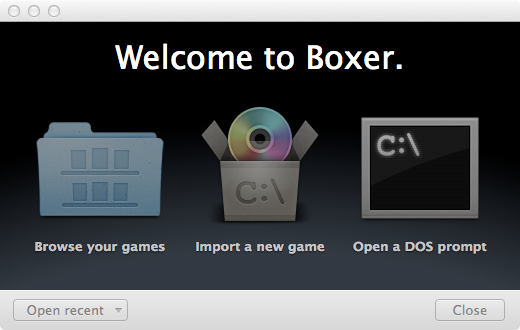 Click on the middle icon in the Welcome screen, "Import a new game". This will bring up another window: 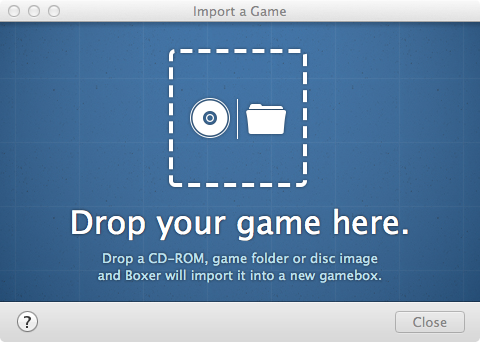 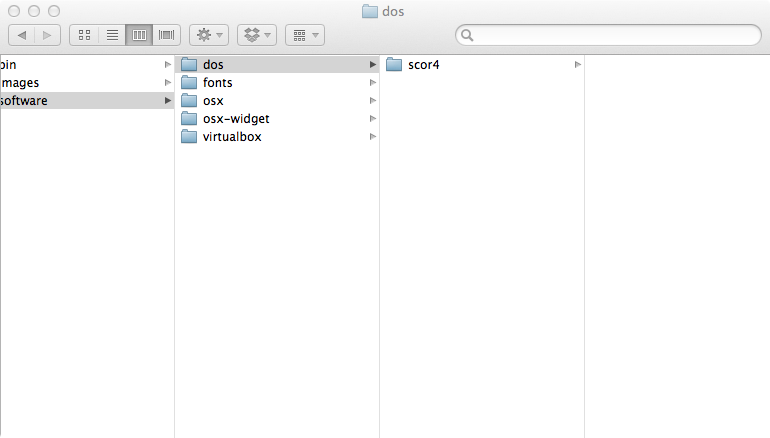 Drag the folder which contains the "scor4" folder ("dos" in this case) into the "Drop your game here." window. After some processing you will get the following window into which you can type the name for the label on the virtual floppy disk: 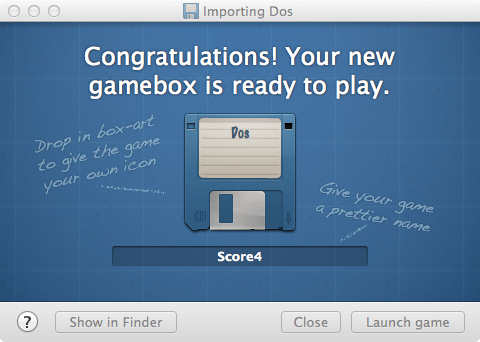 Click on "Launch game" to start the virtual DOS program. You will see a window such as in the following image which contains the virtual MS-DOS computer. At the bottom of the window is a list of executables and batch files that boxer automatically found within the SCOR4 directory. You can either start SCORE from the DOS prompt (by typing "\scor4\scor4.exe") or by clicking on the "scor4.exe" text a the bottom of the window. 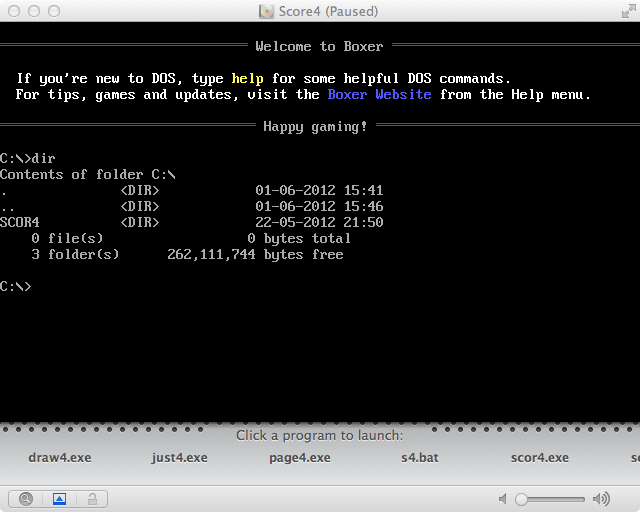 After typing "\scor4\scor4.exe" or clicking on "scor4.exe" in the lauchbar at the bottom of the window, you should have SCORE version 4 running in the virtual MS-DOS program: 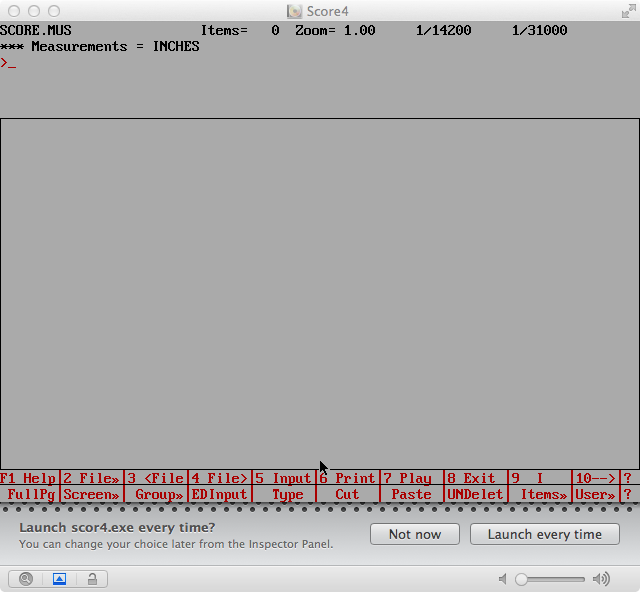 You can type ⌘+F to make the MS-DOS window full-screen as in the following example screenshot. Pressing ⌘+F while in full-screen mode will revert back to window-mode on the Desktop screen. Click the following image three times to see the full resolution. 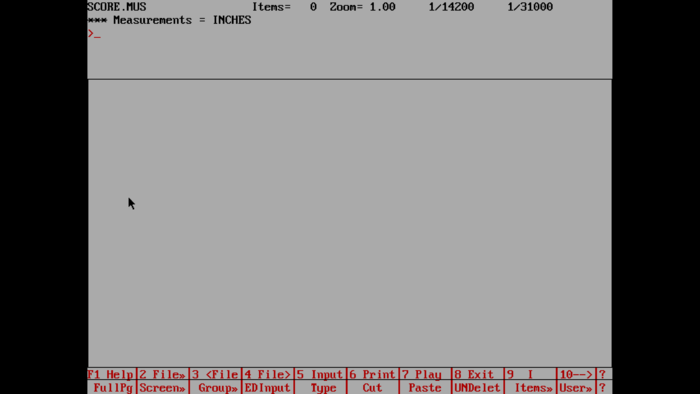 To run SCORE 4 in the future with Boxer.app, you will find a directory called "Score4.boxer" (or whatever you labeled the virtual floppy disk/CD-ROM case") in the "DOS Games" folder in your home directory. To run SCORE 4 again, go to that directory, and you will see a list of DOS applications, including "Score4.boxer": 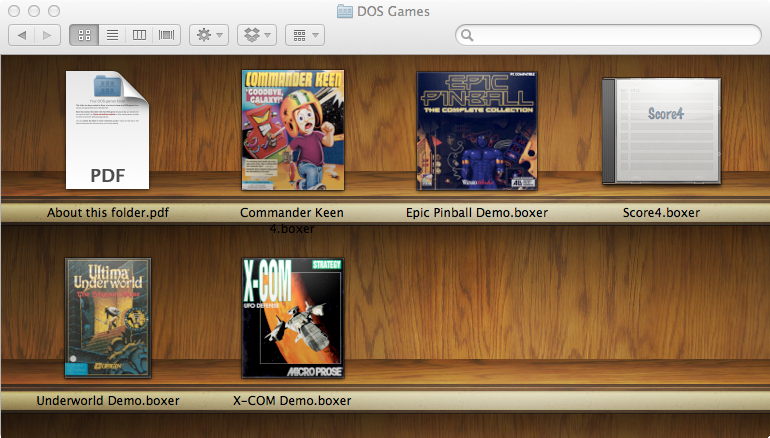 Refinements to the SCORE 4 installation in Boxer.app

There is a bug in the display of SCORE 4 in Boxer.app which is related to a similar problem in DosBox. To fix the problem, download SCROLFIX.COM and place it into "~/DOS Games/Score4.boxer/C dos.harddisk" (or wherever your SCORE 4 Boxer installation is stored). Running this command will fix the following problem when using score. In the following screenshot, the text "Enter 14 rhythms" is incorrectly placed within the graphical area of the DOS window: 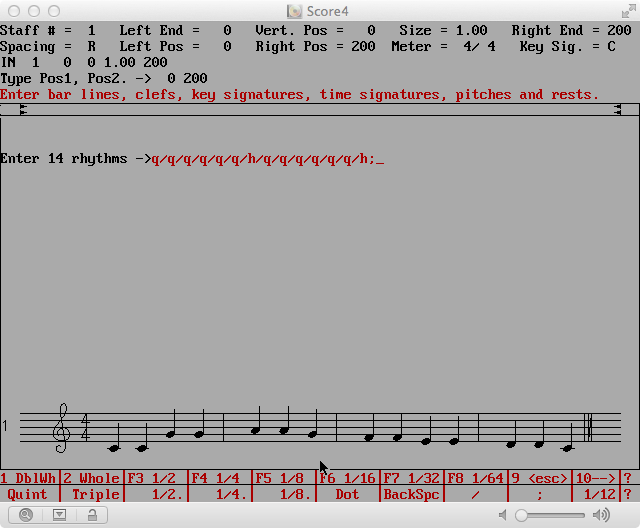 If you run SCROLFIX.COM before running SCOR4.EXE, you will no longer get this error: 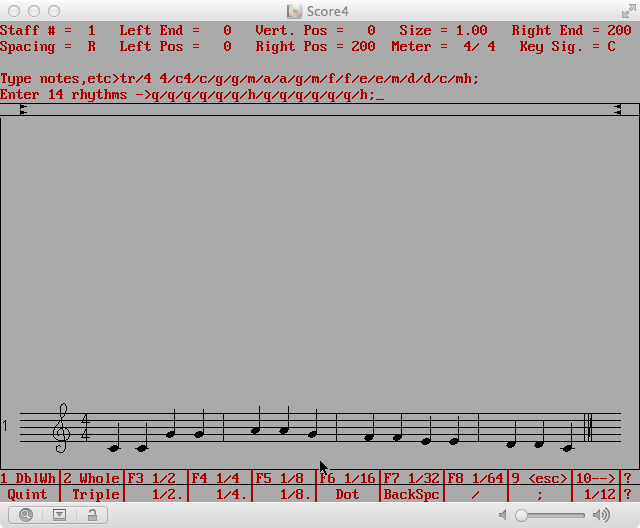 You can create a batch file called scor4.bat in the C:\ directory which has these contents:

Then you can type "scor4" in the C:\ directory to start score from the batch file. You can also move to a particular directory which contains your score files if you store them in a different location. Running a batch file something like:

If the directory "C:\files" exists.

You can store your data files in a subdirectory on the C: drive. For example, if data files are stored in "C:\files", then there will be a directory in OS X which is called "~/DOS Games/Score4.boxer/C dos.harddisk/files". You can access the files in this directory from within OS X. It is somewhat difficult to access the files via the Finder using this method. Instead, you can create a symbolic link to a directory which is more easily accessible in OS X from the finder, such as ~/Documents/Score Files". To do this, you will need to open /Applications/Utilities/Terminal.app and type these commands:

This will create the directory ~/Documents/Score Files and make a symbolic link to that directory which is called "files" on the C: drive in the virtual MS-DOS computer

Another method of storing files outside of the .boxer directory is to use the DOS drive mounting system in Boxer.app. To do this, go to the top menu item Drives → Add DOS Drive... (or press ⌘+⇧ Shift+O). Then select the directory in OS X which you want to mount as the D: drive (or any other drive letter) by choosing the desired folder in the dialog window which appears. An equivalent drive installation method would be to open the Drives Inspector in Boxer.app, and then drag an OS X folder into that window to create a DOS drive linked to that folder.

In addition, disk drives can be created as symbolic links within the .boxer directory for a virtual MS-DOS computer. In Terminal.app, you could type:

In the default settings for OS X, you can access function keys by pressing and holding down the Fn key and then one of the function keys at the top row of the keyboard (F1, F2, F3, etc.).

Instead of pressing Fn+F1 to get the help screen in SCORE 4, or to access any function key in general, you can reverse the role of the Fn key so that pressing F1 by itself will generate a function-key press, and Fn+F1 will generate a screen-dim keypress. To do this, go to the "System Preferences..." option in the Apple menu in the top left corner of the screen. This will open the system preference panel: 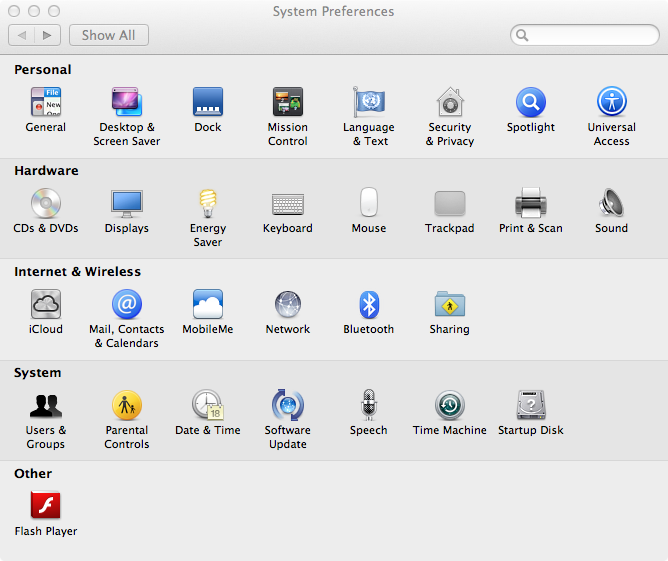 In the system preferences entry, select the "Keyboard" icon in the "Hardware section (second row in the example image above). This will open the following window. In the Keyboard settings window, select the box in front of the text "Use all F1, F2, etc. keys as standard function keys". This will reverse the roll of the function keys, so that typing them without Fn will generate function-key presses, and pressing with Fn will use the alternate meanings for the keys (screen brightness control, sound control, etc.). 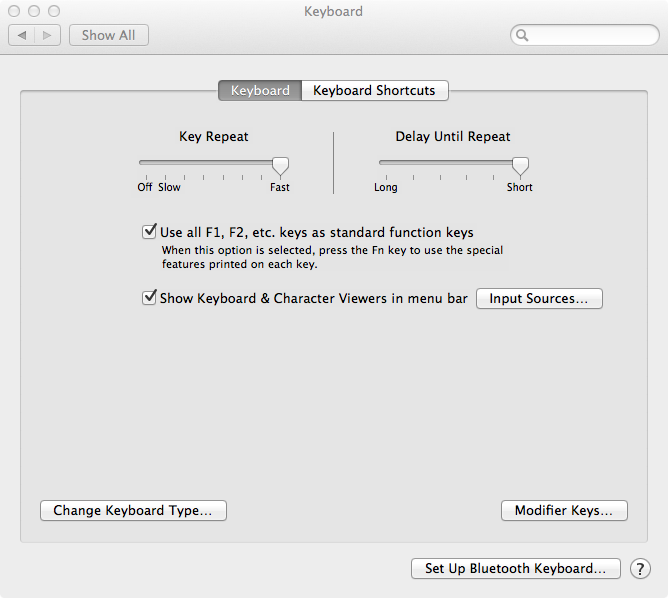