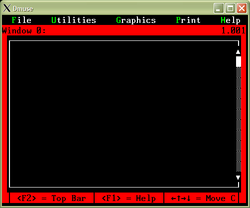 After an initial splash screen, Dmuse presents to the user an empty text-editing window as illustrated in the figure to the right. What you see is a view of one out of thirty possible editing windows. You will see a blinking cursor in the upper left-hand corner of the screen. The arrow keys will move the cursor anywhere within the screen. The metaphor here is a blackboard: as you can write anywhere on the blackboard with a piece of chalk, you can write (type) anywhere on a Dmuse window. In this respect, Dmuse does not work like most text processors which contain empty lines that are filled with content from left to right.

The Dmuse interface makes extensive use of the keyboard with numerous combinations of the Shft, Ctrl, and Alt keys. Since the layout and response for the PC-Linux and Macintosh keyboards is slightly different (e.g., the Mac has no Insert key), there are some differences between the PC-Linux and Macintosh versions of the command list. The Dmuse documentation is designed to take this into account; so that if you are running the Mac version of Dmuse, all of the internal documentation will correspond to that version. For purposes of this document, the following descriptions will be for the PC-Linux version of Dmuse. Every keystroke combination in the PC-Linux version has a corresponding keystroke combination for the Mac.

Commands for moving the cursor and viewing the window.

The first thing to note is the difference between a "window" and the "screen". Using the metaphor above, a "window" is the full blackboard; the "screen" is a view of a portion of that window. Windows in Dmuse can be quite large; up to 960 columns, and up to one million lines of text. The screen size is whatever fits into the X-window you have set up for Dmuse (changeable by your computer's window manager). Here are some commands for moving the cursor and viewing windows:

Keystrokes that highlight, and what you can do with highlighted material.

With many programs the mouse is used to highlight text. This requires the "hold and drag" motion of the mouse, something Dmuse does not currently do. Instead, Dmuse has the following keystrokes to highlight areas of the window. In Dmuse, there are two kinds of highlight: box highlight and line highlight.

The second type of highlight is the line highlight. The line buffer does not work like the box buffer. It is a last-in, first-out trash heap. And its size is limited only by the size of your disk! The line buffer works across all windows, so you can use this feature to move material between windows.

Note: We normally use the line highlight method to delete or copy lines. Not only does this allow groups of lines to be deleted/copied, but also for safety reasons it is helpful to see what you are deleting before it is deleted. Note also that all lines deleted in this way can always be recovered at least once. The trash heap never goes away, but the top layer can be removed. There are two other commands that delete lines (covered below), which do not put deleted material on the trash heap. Material delete by those commands goes away completely (from the window, anyway).

When you type KeyPad +, you will be asked for the name of the file to load. If you respond with $, you will be asked for the name again, and the file will be displayed as a Hex dump (handy for looking as such things as MIDI files). If a file is loaded as a Hex dump, the contents of the window do not match the contents of the file. You therefore do NOT want to store the window back to the file which was its source. To prevent this error from happening, a "read-protect" lock is put on the window. The word "Window" at the left of the top frame turns Blue. This way, the window cannot be "read" back to any file. You can toggle the read-protect flag using a command from the menu invoked by the Ctrl+F10 keystroke. If you totally clear a window, the read-protect flag automatically goes off.

When you type Shft+KeyPad +, you will be asked for the name of the file to which the window is to be stored. If you enter $, the window will be stored back to the file from which it was last loaded (as noted in the top frame). When a window is stored to a file, the contents of the window and the file are the same, and the "difference flag" in the top frame goes off.

You can load one window from another by typing KeyPad + and then giving "*<number>" as the name of the file to load, <number> being the number of the source window. A window loaded in this way has no "source" per se.

Material cleared in this way cannot be retrieved. Clearing a window has NO EFFECT on files. The source file, if there be one, is unaffected.

Tabs also require some discussion. In some Linux applications (again, makefiles are an example), the Tab character is an important delimiter. It must be present for the file to be read properly. When Dmuse loads a file, it treats the Tab character like a text character. Yes, the Tab has its own character in Dmuse, which can be entered by typing Shft+Alt+0. This means two things: (1) the Tab is not expanded, and (2) such files can be edited correctly by Dmuse. If you want the Tab expanded, you need to use the command Ctrl+KeyPad + to load the file. But use caution here. In expanding the Tab character, you may lose it. Or you may lose space characters before a Tab. When in doubt, for files like this, we recommend using another editor entirely.

Dmuse has wordwrap as an advanced feature. But, as you can imagine, this can only work within limits. The first limits are the margins, themselves. Wordwrap works only when the cursor is between the legal margins. When the cursor is outside the margins, you can still type text, but whatever you type might disappear if the margins are changed, so be careful.

Dmuse is initially provided with wordwrap disabled. You can activate it using a command from the F9 menu. When wordwrap is enabled, KeyPad * toggles it on and off. When wordwrap is "on," you will see the wordwrap flag [W] on the right-hand side of the top frame. We rarely work with wordwrap on, but we do use it to reformat (change the horizontal size of) paragraphs.

When wordwrap is on, the keystrokes Return, Insert and Delete behave differently. This difference is documented in the "Advanced Topics" choice under the "Help" menu in the top frame of the Dmuse screen, and will not be discussed here.

Dmuse starts out as a simple screen editor. You can activate the connect mode feature by using a command from the F9 menu. Once you activate this feature, it stays activated for all future Dmuse sessions until you deactivate it.

The Shft+KeyPad * keystroke toggles connect mode. When you enter connect mode, Dmuse responds with the message, "Ready for program," and the connect mode flag [*] comes on in the top frame. Connect mode is window dependent, that is, each window has its own connect mode state.

When a window is in connect mode, you can type anything you want and put the cursor anywhere you want. Nothing happens until you type Return. When you do that, Dmuse reads whatever is on that line, regardless of how it got there, and sends this to the connect portion of the program. The program at this point expects one of three things:

The most important point here, and what makes Dmuse different from most other interfaces, is that it doesn't matter how or when something got put on the screen. If you type return, the entire line gets read and sent to the program. The Zbex language has an instruction, getc, which works the same way. When executing a getc, Zbex waits -- does not listen to what you type -- does not care if you change windows, insert or delete lines, move the cursor, whatever. It simple waits for you to type Return, and when you do, it reads the line the cursor is currently on and sends this to the program.

Dmuse has a utility called "Keystrokes" which can be called either from the "Help" menu or with the keystroke command Ctrl+F1. Once you enter this utility, each key you press on your computer keyboard returns a complete description of what that keystroke does, including all combinations with Shft, Ctrl, and Alt. The only way to exit this utility is to push Esc twice. Listed below are some of the most important and useful keystrokes.

The Escape and Function Keys