Difference between revisions of "Benedetto Marcello (1686-1739)"

Born in 1686 to a noble Venetian family, Marcello was the youngest of three surviving sons. All three studies jurisprudence. All three indulged in various artistic and literary undertakings. Two—Alessandro and Benedetto—were musicians and composers.

Three factors distinguish the creative efforts of all three Marcello brothers from those of earlier and later generations. These were their academic orientation, their striving to excel in multiple areas of artistic enterprise, and the tendency (shared by Benedetto and Gerolamo) to a moralizing tone. Alessandro, the eldest, was of a more hedonistic turn.

By the time Benedetto Marcello was born, many distinguished families in the Venetian nobility were oriented towards honing their intellectual and cultural skills. Venice itself appeared to be in robust economic and political health, but its influence was starting to wane and its markets were contracting. These problems became acute as Marcello reached his maturity. It is noteworthy that, despite the decline of family fortunes, Marcello chose to commit his most important musical works to musical scores made available with the utmost attention to graphical detail and probably, therefore, at great personal expense. It is also a peculiarity of Marcello's music that what was published came entirely from Italian presses. Yet the long tradition of Venetian music-publishing had come to an end by 1700. His music did not in consequence enjoy the broad circulation that works publishing in England the the Netherlands came to enjoy, but enthusiastic followers gave it an enormous circulation in manuscript.

Benedetto Marcello, a Venetian polymath, was a direct contemporary of Antonio Vivaldi (1678-1741). The difference between them could not have been greater. Marcello descended from a noble family that had made numerous contributions to the civic and governmental life of the Venetian Republic, while Vivaldi descended from a family of small merchants. Marcello was educated in the manner of most noble Venetian males: at the Colleggio dei Nobili and at the University of Padua. Vivaldi was a day student at a district seminary. Marcello was a cellist, Vivaldi a violinist. Marcello was also an accomplished keyboard player.

As adults, Marcello served in a long series of magistracies and government posts in Pula (then part of the Venetian peninsula, now within the borders of Slovenia) and, finally, in Brescia, where he died. He was something of an outcast in the last decade of his. Vivaldi accrued one accolade after another as a virtuoso but increasingly involved himself in the world of opera. He too suffered various career setbacks in the final decade of his life and died a pauper in Vienna.

Marcello was sometimes envious of Vivaldi's fame, particularly in the face of musical and theatrical practices the nobleman considered specious and superficial. Recent research suggests that there were deeper motives for this antagonism. They issued from confrontations between the two in the equivalent of small-claims courts. Many of Vivaldi's operatic productions were financial disasters. Local magistracies had the duty of setting things to rights.

The recent popularity of Vivaldi's music has completely eclipsed the substantial repertory that Marcello created. Marcello's numerous achievements fall in very different places from those of Vivaldi. The course of his career as a composer, which was interwoven with his career as a magistrate, moved from one genre to another.

Marcello's music is wholly unlike Vivaldi's. The genres in which he specialized reflect his learnedness as a Venetian nobleman. Many of his peers were far less bookish, but Benedetto's family was one of the oldest in Venice. Other members of his family--especially his brothers Alessandro and Gerolamo and his mother, Paolina Capello--were all noted intellectuals. All centered their friendships on members of the learned academies they frequented. (Academies of the time were not institutions granting diplomas or degrees but groups of talented persons who met at frequent intervals to share interests, curiosities, and newly created works.) 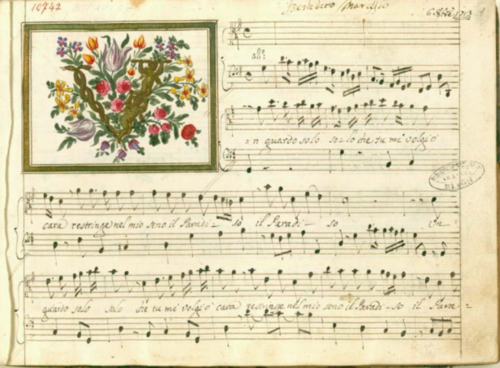 Most of Marcello's cantatas, duets, madrigals, and serenatas ower there existence indirectly to Marcello's fundamental commitment to the Arcadian movement. Noblemen and women were admitted to the Arcadian Academy after demonstrating superior intellectual and civil virtues. Upon entry, they took an Arcadian pseudonym and usually published their creative works under that name. Since, however, Marcello's Arcadian works survive almost entirely in manuscript, his nickname was rarely used. Arcadians emphasized simplicity in both their poetry and their music, but they also like clever jokes and forms of literature for which ancient models existed. Horatian satires and myths as conveyed through Ovid's Metamorphoses were particular favorites. There are numerous evidences that Marcello was well acquainted with both.

More than two dozen of Marcello's cantatas for solo voice were written for weekly meetings of the Venetian branch of the Arcadian Academy in Venice. We know from dates penned onto the first page of each exactly when they were first performed (a rarity at the time), but we are led to believe that the singers would have been members of the academy. Marcello himself could have played the keyboard, or the cello.

Marcello's Canzoni madrigalesche Op. 4 (Bologna, 1717) seem to have enjoyed almost as much respect as his Psalms of David. Marcello had made several visits to Bologna in connection with his acceptance by the Accademia Filarmonica (1711), the musical equivalent of a literary academy in which judgment was passed on newly presented works. (His acceptance was based on a mass in honor in Clement XI.) Marcello addressed his preface to "sages and wizards of counterpoint" (dotti e savii contrapuntisti). He held that there should be a difference between vocal chamber music and ecclesiastical music. With respect to the nomenclature of musical genres, Marcello said this volume contained canzoni (songs) and arie (arias), which collectively bore the label madrigali (madrigals). contained xx madrigals for various numbers of voices.

Marcello wrote a diatribe (his Lettera famigliare) against the madrigals of Antonio Lotti (1667-1740). A noted San Marco organist, Lotti enjoyed great recognition both for his operas. His life was markedly contrasted to Marcello's, for Marcello sought no role in music for the theater or the church. As a nobleman he was duty-bound to spend all of his adult life in government offices that were originally concentrated in Venice but by 1730 began to stretch eastward to an outpost in Pula on the Istrian peninsula, then westward to Brescia, where he died in 1739. (Marcello is buried in the church of San Giuseppe, where Costanza Antegnati was once an organist and where a diocesan museum is now found.) In his Op. 4 Marcello reset several madrigals from Lotti's set of Duetti, terzetti e madrigali a piu voci (Venice, 1705). He had held that Lotti's polyphony was marred by an excess of melismatic passagework and arbitrary treatment of dissonance. (It appears that Lotti's understanding of Renaissance chromaticism was incomplete.)

In Marcello's volume, the the two-voice works are relatively short and simple. It is the four canzonas for three voices and the two madrigals for four in which he invests his great love of Renaissance polyphonic practices. The three-voice works were "Il quel sol che in grembo al Tago", "In una siepe ombrose", and Piange l'amante ucciso." The first had been set earlier by Alessandro Stradella, the second (a 5) and third (a 4) by Lotti. Through the intermediation of Maurice Greene, G. B. Bononcini passed off Lotti's setting of "In una siepe ombrosa" as his own at London's Academy of Vocal Music (1731). This precipitated an investigation by the Academy of Ancient Music (1732), as a result of which both figures resigned from the Academy.

Marcello's settings of the Psalms of David (1724-1726) were truly famous throughout Europe from about the time of their composer's death (1739) until the early twentieth century. They were translated, reprinted, arranged, and segmented into smaller forms (such as "motets" and "anthems") ad infinitum. See principal coverage here.

Marcello's satire on opera, Il teatro alla moda (1720), is a work that has not been out-of-print for 300 years. It is a slender volume that appeared at the start of the winter season 1720-21. To those involved in opera at the time, its targets were transparent. Succeeding generations have turned over and over the Marcello's comments (now seen s generic) on composers, prime donne, violinists, stage-mothers, and the many other contributing entities of theatrical life.

Marcello also composed musical satires, for which he likely wrote the text.

The madrigals, which are included in Op. 4, are likely all to have been composed in 1715 or 1716. They satirize the relationship between a choir of mixed voices and a choir of castrati. This pair, collectively called Il flagello dei musici, are separately entitled:

The first, labeled a Capriccio for five voices (soprano, two tenors, two basses), is one of the most widely circulated of Marcello's works. Its popularity was greatest in Italy and Germany, but the madrigal also found its way to England, Poland, and the United States. Tenors and basses predict that castrati will burn in eternal damnation.

The castrati respond gaily at the start of the second work, scored for two sopranos and two altos. They demonstrate their ability to sing in "good taste" (Marcello crusaded for singing uncluttered by endless ornamentation), then show their accuracy in singing contrapuntally. Then they launch into a series of diminutions which lead them, at ever an ever faster tempo and and an ever high pitch, to the final phrase, "Those who are castrati will be blessed. When they reach the second syllable ("ah")of the word "beati", they find themselves lured into a musical maze from which they cannot escape.

Letter cantatas were a minor sub-genre spun off from letter scenes in operas, where letters served to conveying action that took place off-stage. Marcello's "Carissima figlia" is an entirely different species of work.

This work purports to convey advice to the prima donna Vittoria Tesi from her father in Bologna. In it the singer satirizes the styles of several ranking donne of the time. It is the portrayal of the styles of each that makes gives the work its force. Since we have no recordings of singing at any time in the eighteenth century, it gives us a faint notion (probably exaggerated) of how each of the singers represented a unique style.

In the performance of dramatic tragedies on stage, it was usual in the 1720s to separate the acts musical intermezzi. As in opera, they were often farcical. Marcello's intermezzi for Spago e Fileta, which was intended for performance with the tragedy Lucio Commodo (1719), is as much a satire on comic intermezzi in opera as it is an autonomous musical work. (Comic intermezzi frequently focused on an unlikely pairing (e.g. a serving maid in pursuit of a rich widower). Spago enters with the recitative, "How much would it cost me to get married?" and continues with the aria "I would like Fileta." Fileta takes pride in her ability to teach other young women how to attract a man. To strength Spago's interest, she demonstrates the steps of the minuet, recently imported from Paris, in response to which Spago makes unflattering asides.