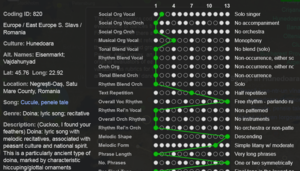 This aggregation of web links for recordings has several component parts: choral music, folk and fiddle tunes, and ethnic repertories from all over the world. The archive of Chinese music [1] labeled in Mandarin and English and one of its many unusual entities. Numerous collections include auxiliary material--photographs, videos, podcasts, and descriptive material.