Corelli's violin sonatas are associated with a long trail of manuscripts demonstrating different ways to enhance the violin part. This trail extends for almost two centuries beyond the original publication date of 1700. Numerous studies have examined the various techniques involved. The noted musicologist Neal Zaslaw, collected and transcribed 15 of these alternative versions in the 1990s, observed that by the later nineteenth century the elaborations were sometimes so free that they failed to conform to the original harmonic scheme.

The piece for which the largest number of elaborations is Op. 5, No. 9. We reproduce here three versions (Staves 2, 3, and 4) of the first two bars of its opening Preludio. Corelli's original material is given on Staves 1 and 5. Although we do not know who prepared the the two versions in the Henry Watson Library in Manchester, UK, it is likely that both come from the first half of the eighteenth century. 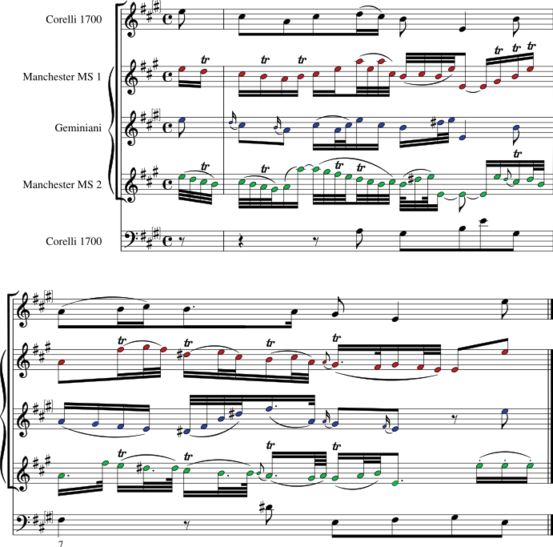 The violin virtuoso Francesco Geminiani (1687-1762; see Staff 3) was a pupil of Corelli (c. 1704-06), was greatly revered in England and Ireland, where, from 1714, he spent most of his life. In his later years he arranged works by other composers. Among these reworkings were concerto grosso settings of Corelli's violin sonatas, Op. 5. In his Art of Playing the Violin (1751) he gave considerable attention to ornaments. Some of his recommendations, particularly for avoidance of metrical accentuation, were controversial. The placement of trills on weak beats (Manchester 1, Bar 1) would seem to be an exemplification of his advice.