The music of Arcangelo Corelli (1653-1713) exerted an influence on the development of string music that far exceeded the implications of the modest number of prints in which they were circulated. Only six volumes of works, each containing twelve sonatas or concertos, were published, and the last after Corelli’s death. Corelli’s fame emanated from his playing in Rome, where the courts of cardinals offered much of the best, and best supported, music. Corelli’s particular patrons and benefactors included Cardinal Benedetto Pamphili and his successor, Cardinal Pietro Ottoboni as well as the exiled queen Christina of Sweden. His popularity in the eighteenth century (much of it posthumous) was immense. Printed copies of his works from that time are widely spread throughout Europe, North America, and East Asia.

According to long-held views, the difference between church and chamber sonatas inhered in their structure and content. Church sonatas typically contained four movements in the sequence slow-fast-slow-fast (e.g., Adagio-Allegro-Adagio-Allegro). Imitative writing could occur between treble and bass instruments or between the two violins. Chamber sonatas contained a variable number of movements, each of which imitated the meter of a particular dance type. Common dance-movement types were the Allemande (a fast movement in duple meter with flowing sixteenth notes), Sarabande (a slow dance in triple meter), Corrente (a “running” or moderately fast dance in triple meter), and Gigue (a fast movement in compound meter, such as 12/8).

Arguments against taking these distinctions literally have become numerous. Although the typologies were inspired by such distinctions, they drifted from these idealized norms to suit particular situations, to accommodate contemporary tastes, and to give scope to the styles of individual composers. With respect to the usage of the terms, Corelli’s Op. 2 seems to have been the first to gain a large enough following to secure the practical use of the term sonata da camera.

Had he never composed his two later collections of music, Corelli’s music would still have left an enormous imprint on European musical culture of his time and the ensuing decades. Up to the end of the seventeenth century, Op. 1 was reprinted 11 times; Op. 2, 12 times; Op. 3, 8 times; and Op. 4, 6 times, in all cases in Italy. Counting eighteenth-century and foreign reprints, the numbers rise to totals of 39, 41, 31, and 39, amounting to a total of 148 printed editions of the sonatas. No other composer of his generation achieved this kind of recognition. 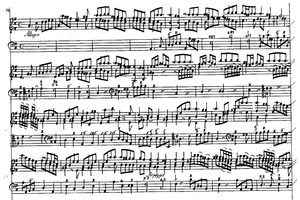 The concerto grosso was a logical outgrowth of the trio sonata. The evolution came about in stages. The differentiation of a concertino (group of soloists) from a ripieno had been found abundantly in the early years of the seventeenth century. The difference would be expressed in written notation by clustering like-timbred instruments (as in modern scores). This clarified the on-again, off-again nature of collaboration between the groups.

The concerto grosso was both more economical and more articulate. It was economical in extracting all the concertino parts from the ripieno parts. There was no musical independence between the groups. In performance, however, the ripieno sounded fuller not only when it involved more instruments but also when a part for viola(s) was added to the two violins and string bass (or cello). Alternation between soli and tutti became more purposely, ripieno refrains (ritornelli) became the norm, and the overall structure of the work was architecturally clear rather than, as in earlier decades, somewhat meandering.

The viola parts in Corelli’s Op. 6 are particularly of interest. They do not occur in any of his other public works, but they show him to be devoted to enabling the instrument to be a full musical participant. (Viola parts in other and later times could be entirely perfunctory and extremely rudimentary.)

Beyond the considerations of resulting sonority, Corelli provides some highly elaborated movements in both sections of Op. 6. The first eight works are modeled on the sonata da chiesa. They have numerous changes of tempo but few extensive slow movements. Adagio and Largo passages are inclined to be short and transitional. The last four works are modeled on the sonata da camera. Most employ allemandes, sarabandes, correntes, and gigues. They do not employ the fussy tempo contrasts of the first eight works.

The long-time favorite of Op. 6 has been the Christmas Concerto (No. 8, fatto per la notte di Natale, made for Christmas night.) The 6/8 meter and the drone bass were widely associated with the simple music of shepherds, who carried a species of bagpipe (zampogna) that played in parallel thirds over a drone.