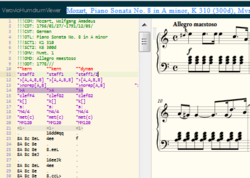 Start of the Christe section of the Missa Ad fugam,tentatively attributed to Josquin, in the Josquin Research Project.

The Josquin Research Project began as an effort to support comparative evaluations of authorship. Surviving works attributed to Josquin fall into two broad groups: those for which authorship is secure and those for which attributions to multiple composers may exist. Currently, 763 works by a total of 23 composers are included. Motets and mass sections predominate. The number of voices varies from three to six. Users can search for pitches, intervals, and rhythmic patterns in a browser. The files are available in several symbolic formats (MIDI, Humdrum, MEI, MuseData, MusicXML, MP3, and PDF). Displays with and without musica ficta are supported. Jesse Rodin is the principal investigator. Craig Sapp manages the website and tool implementations.

The Tasso in Music Project, under the direction of Emiliano Ricciardi, presents all the musical settings of the poetry of Torquato Tasso (1544-1595). For the time, Tasso's work was widely distributed. It was accessible to both the learned and to ordinary people. His best known works are Aminta (1573) and Gerusalemme liberata (Jerusalem liberated, 1574), an epic focused on the First Crusade. Its numerous tales were retold in countless musical contexts, including Monteverdi's Tancredi e Clorinda and subsequent operas of the seventeenth century. Tasso's biography, which incorporated notable emotional vicissitudes, inspired later works by Liszt and Donizetti. Tasso's Rime (Rhymes) were set prolifically by Gesualdo(1566-1613) and Wert (1535-1596). The Tasso project makes both the literary texts and the music (including multiple settings of the the same text) available. The integration of critical information (sources, variants, clefs, mensuration signs) and tools for extracting text from the music are provided. Technical direction is provided by Craig Sapp. Numerous scholars contribute their expertise to the project. Alternative formats follow the model of the Josquin Research Project.