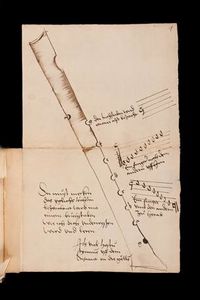 Leaf from an anonymous manuscript introduction to the recorder preserved in the Basel University Library and available through e-manuscripta.ch in source F_X-3.].

This comprehensive portal for materials in Swiss libraries serves scores, photographs, letters, pedagogical materials, and much else. The five-leaf recorder tutor (from a sixteenth-century manuscript) shown at the side represents its heterogeneity, which also extends to sixteenth-century part-books, organ tablatures, correspondence by Martin Luther, photographs of Ferruccio Busoni, and a thousand maps.

This umbrella site for European digitization projects covers a great deal besides music. To start, limit the search by an obvious word for music (musique, musica, Musik, etc.). This will give you an idea of how to further limit the search. Europeana is updated often. Among the items that should be visible are music prints, manuscripts, newspapers dedicated to music, sheet-music, audio files, etc. Since Europeana is an aggregation, it provides links back to the sponsoring libraries that hold the original sources. The site can be searched in many languages.

Gallica provides access to an enormous array of digitized materials from all periods of French history and many aspects of French musical life in addition to great quantities of non-musical material. Among its highlights are illuminated manuscripts contained the poetry (much of it set to music by Guillaume Machaut), manuscripts of the operas Francesco Cavalli composed for the wedding of Louis XIV, a very large amount of music printed in France in the eighteenth and nineteenth centuries, and important documentation for theatrical history.

An umbrella site for digitized materials in Italian libraries. The riches of Italy's collective Internet Culturale (cultural internet) are difficult to overstate. A vast span of different kinds of graphically reproduced material will be found here. All of it is accompanied by generous supplies of metadata from cataloguing records. While one may be able to find a specific item such as an opera, one may also discover on a different spoke a list of all the works in which the singer of an aria appeared. Users can create accounts to collect previous discoveries in one place.

The collection of digital materials grows so rapidly that any listing of individual collections within it is doomed to be inadequate. Several project are cooperative. The historical emphasis is on Middle Ages and Renaissance, with much emphasis on religious figures and documents (e.g. at Europeana Regia). A combined search engine (http://www.digital.collections.de) for all the digitized materials in the Bavarian State Library is currently under development.

This inventory of musical manuscripts in the libraries of roughly 60 countries was begun in 1952. It is still growing (under the management of the Répertoire International des Sources Musicales). The online implementation occurs in the Bavarian State Library. RISM's numerous virtues are easily discovered through this search engine, which came online in 2011 and undergoes continuous development. A RISM blog keeps registered users informed of current activities. RISM has working groups on most continents. Much material that is currently contained in RISM books will (with updating) likely find its way online over the coming years. Those interested in contributing to RISM's efforts can find a local representative by consulting this list.

The Themefinder search engine was prototyped at CCARH in 1996 by David Huron, Andreas Kornstädt, and Walter B. Hewlett. A large number of Stanford University students including Unjung Kim and Leigh VanHandel plus visiting students including Bret Aarden participated in its early development. The search engine was originally developed to study user behavior. Over the intervening years it has been used for a large statistical study of search-efficiency. The current search engine is by Craig Stuart Sapp.

Themefinder contains several repertories, most of which are publicly viewable and searchable. The principal repertories are Folk, Classical, and Renaissance. Although more than 100,000 incipits and associated metadata are present in the database, users may select just one. "Hits" satisfying search-criteria can be collected on the Themefinder Clipboard and can be exported.

Incipits can be searched at five points on a continuing from the most specific to the fuzziest. Filter for meter, mode, and key may be used. MIDI files are available for each entry. Help menus area available at the website. Those interested in contributing an encoded repertory to Themefinder should describe the existing repertory and format in a query letter.