The digital archive at the Beethoven-Haus, Bonn, contains manuscripts, sketches, letters, pictures, sample sound recordings, and much else. Beethoven lived here, and the physical museum also houses his instrument collection. A recently funded project involving the Beethoven-Haus and the Musikhochschule in Detmold will develop an ambitious "Beethoven Werkstaat" project taking viewers through the development of individual works by way of sketches and editions. 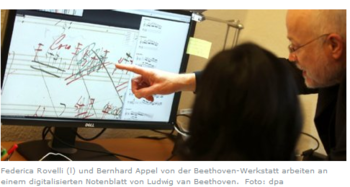 Federica Rovelli and Bernhard Apel examine a digitized Beethoven sketch at the Beethoven-Haus on Nov. 30, 2014. Image from the Forschung in Bonn column of Nachrichten und Bilder aus Bonn.

The ambitious Beethovens Werkstatt project, officially launched in 2014, will between now and 2030 reconstruct (with images and critical notes) the path of development of Beethoven's works from inception to completion. This project is based on the composer's sketch books, which in the digital version are to be carefully annotated with the help of MEI (the Music Encoding Initiative), a markup language for the encoding of musical sources facilitating their citation in critical editions. Bernhard Apel (Beethoven-Haus, Bonn) and Joachim Veit (Musikwissenschaftliches Institut, Detmold/Padlerborn) are the project directors. Johannes Kepper (Edirom project) is centrally involved in the technical development of both Werkstatt and MEI. The link above shows a prototype browser for viewing both manuscript iterations and modern notation for variants in the first movement of Beethoven's C-Minor Piano Sonata Op. 111 in Variants 14-17 (Beethoven-Haus BH 71).

Aaron Copland's "Fanfare for the Common Man" (1942): Sketch of the opening bars (electronic resource) from the Library of Congress.

The Aaron Copland Collection, available at the Library of Congress, is an exceedingly rich one that contains every imaginable kind of evidence of the composer's long life (1900-1990)--manuscripts, sketches, typescripts for talks, personal photographs (roughly 5,000 of them), childhood mementos, and letters. Apart from photos, 981 other items can be found here.

Handel's Messiah and other virtual "page-turners" from the British Library

The British Library's Virtual Books website contains a number of important manuscripts, the folios of which can be "turned" by the user. In addition to the autograph score of Handel's Messiah, "Sumer is icumen in", the Old Hall manuscript, the manuscript for Book II of J. S. Bach's Well Tempered Clavier, a Purcell anthem for the coronation (1685) of James II, sketches for Beethoven's Sixth ("Pastoral") Symphony, Elgar's "Enigma" Variations, and Mozart's musical diary (Zweig MS 63) are set up in similar fashion. A listing of other viewable musical works can be found here.

30 volumes of autograph manuscripts by Gustav Mahler are housed in the Bavarian State Library (Munich). Offerings include Das Knaben Wunderhorn, sketches for three symphonies, and Mahler's correspondence with Emil Hertzka.

This collection of manuscript materials (91 titles) documents the musical career of Carl Orff (1895-1982). It includes, Lieder, stage works, modern arrangements of Monteverdi operas, and other materials. Because of continuing copyright restrictions, many items can be consulted only on site in the Bavarian State Library. Nonetheless the detailed listing is valuable in documenting the range of Orff's interests and activities.

The music of Max Reger (1873-1916) occupies a unique place in the keyboard repertory of its time. His organ works are better known than his other music--concertos, Lieder, choral works, and a clarinet quintet. Forty titles are viewable here.

The Arnold Schönberg Center in Vienna, which holds a cornucopia of Schönberg memorabilia that extends to film footage of the composer's real-world experiences such as being briefly employed as an auto salesman, his "contacts" list, and personal photographs, provides an online list of works, biographical sources, information on performing rites, and much else.

The music of three Johanns (father, son, uncle), one Josef, and one Eduard is represented at this website based at the city library of Vienna. More than 300 works are available here. Almost 200 of them are by Johann Strauss the younger, the waltz king. A few sketches, operettas, marches et al. are included. The minor Strausses composed polkas as well as other short instrumental pieces. Eduard's Theorie der Musik from c. 1845-50 can be downloaded here. An online catalogue of the library's printed works is available here.

Among these 84 titles are numerous sketches, fragmentary compositions, and Lieder. The originals are held in the Bavarian State Library.

Abbe Vogler (1749-1814) left a substantial collection of manuscripts (75 titles) that include chamber and sacred music, concertos and symphonies, plus several items that relate to his opera Castor et Pollux.

This collection of unpublished materials from the archive of the Bavarian State Opera brings Wagner's goals and working habits into our midst. Under 170 rubrics it documents the composer's movements, collaborators, and evolving ideas about music and role of music in society. They also give a more rounded view of his range of interests than many published accounts.

Ermanno Wolf-Ferrari (1876-1948) followed the path of aspiring students of his time in examining the details of earlier composers' practices. This collection of his manuscripts (175 titles) includes transcriptions of keyboard works by J. S. Bach, sketches of operas, concertos, symphonies, comic operas, a passion, sonatas, string quartets, and other chamber music.

In many ways e-codices, the Virtual Manuscript Library of Switzerland, is an unsurpassed example of maximal access to fundamental but rarely seen sources. Currently serving 1,190 sources, it was started in 2007. Its value to musicology owes partly to a tight coupling between early histories of music and the sources on which these accounts were often based. Access to color images of the materials long known only from running-text summaries of them enables users to pose new questions of interpretation. Users can construct new juxtapositions and concatenations of source details in relationships that could not previously be explored. An annotation tool enables users to highlight pertinent findings. e-codices is based on like-named software, which holds the distinction of running equally well on mobile and non-mobile platforms. An author list is available here.

Among the many riches to be found are these rare items:

Recent software enhancements and links for the e-codices newsletter are available.

A sketch for the first movement of Gustav Mahler's Ninth Symphony, from the Juilliard Manuscript Collection.

Among its 221 music manuscripts posted online, the Juilliard School possesses many unexpected items and substantial coverage of twentieth-century British and American composers (Samuel Barber, Frank Bridge) and many European composers whose music was popular in the US. Other collections represented at Juilliard include the collections of pianist Arthur Rubinstein and the popular composer of musicals Meredith Wilson (1902-1984).

Music Gifts for the Russian Emperors

The National Library of Russia has made available this carefully curated collection of music given to Romanov emperors by visitors from France, Italy, Germany, and elsewhere. Many holdings come from Russia, where Western European music was introduced early in the eighteenth century. Holdings come from the 18th-20th centuries. Some of the music was brought by foreign teachers (e.g., Vincenzo Manfredini) for the royal progeny. Many works were provided with dedications to the emperors. Czech and Austrian music flowed copiously into Moscow at the end of the eighteenth century. A "Festival Song" by Felix Mendelssohn has a particularly interesting history, which is related here. The digitized pieces are linked to a database containing information about the social context and pertinent musical detail. The list of manuscripts (using Cyrillic script) can be found here, while a search engine (Roman script) is here. Drop-down lists contain listing in both Cyrillic and Roman, as appropriate, while the popup keyboard facilitates Cyrillic input. Source descriptions are in Russian. 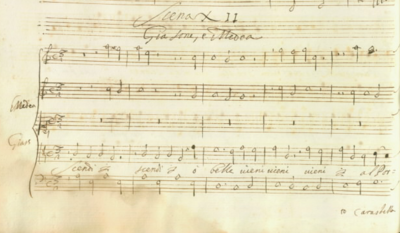 Music Manuscripts in the Marciana Library

The "library of St. Mark" (i.e. the Biblioteca Nazionale "Marciana" in Venice) holds acquisitions that have been accumulating since the sixteenth century. Following guidelines widely shared across music libraries in Italy, it has digitized music manuscripts that are most closely tied to Venice's musical history. These include many important sources for seventeenth-century Venetian opera (Francesco Cavalli, Domenico Freschi, Giovanni Legrenzi, Carlo Pallavicino, P.A. and M.A. Ziani, and many others); 66 volumes containing cantatas of the eighteenth century by Benedetto Marcello (445 titles) and his nemesis Antonio Lotti, minuets by Baldassare Galuppi, and all the keyboard sonatas of Domenico Scarlatti (357 titles; his familiarity with Venice was minimal). Operas can be accessed by act.

This rich collection of the Wettin court, starting from the time of August the Strong and continuing to 1896, when it was donated to the Royal Library, is rich in holdings of sacred vocal music and Italian opera. Today it resides in the Saxon State and University Library (SLUB in the German ordering). The online holdings have been subdivided into these components:

The Opera Archive, which includes libretti, scores, and extracts, is currently being digitized. It overlaps the collaborative project Opera in Italy and Germany (1770-1830). This collection contains roughly 650 operas and opera extracts from the years 1764 to 1900. The private collections of court and church music include 750 manuscripts from the years 1697-1763.

The current familiar name of this collection (http://hofmusik.slub-dresden.de/themen/schrank-zwei/bestandsuebersicht/ Schrank II]) owes to the designation for the cabinet in which it was long stored. It is a rich collection of instrumental music, mainly from the eighteenth century. Much of it is in the hand of Johann Georg Pisendel, an intrepid collector of Italian instrumental pieces, particularly from Venice. It contains 1795 listings in 1750 physical manuscripts. Copies of Italian instrumental music of the early eighteenth-century are especially numerous. By clicking on the highlighted text in the first sentence of the description users can download a spreadsheet with a full listing of holdings, most of which are digitized and are also accessible from the RISM OPAC.

This website provides links to collections of manuscripts containing cantigas of Gallic and Portuguese origin. Many are preserved in the Vatican Library. The contents of each source is indexed, with full texts given in many cases. A sample folio is shown for each source.

This link takes you to the second volume of Mathew Holmes's four-volume Lute Book in the Cambridge University Library. Its companions are the Cosens Lute Book and a volume of fragments of Elizabethan music for lute. Holmes was a singer at Christ Church, Oxford, and at Westminster Abbey. Cosens was a nineteenth-century owner of this collection of sixteenth-century music.

Illuminated manuscripts associated with the Low Countries in the Vatican Library can be viewed in high resolution owing to the generous support of the Alamire Foundation (Leuven, Belgium). The contents at the end of 2012 totaled 13,500 images.