Arcangelo_Corelli_JanFrans_van_Douven.png|250px|thumb|right|Portrait of Arcangelo Corelli by Jan Frans van Douven (1656-1727), a Dutch painter in the service of Corelli's patron, the Elector Palatine Johann Wilhelm.]] 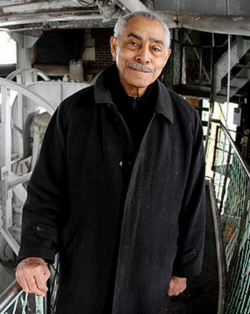 The carillonneur Dionisio Lind (10 February 1931-10 October 2018) was captivated by the sound of the bells at St. Martin's Episcopal Church, Harlem (NY), in the 1950s. He took lessons there and began his official career as the church's carillonneur in 1960. He progressed to well that the church sent him to the Royal Carillon School in Mechelen, Belgium, in 1962. In 2000 he was invited to move to the Riverside Church, overlooking the Hudson River, at 120th St., where he served as principal carillonneur until his death.

The church, modeled on Chartres Cathedral, carillon's 74 bells range in weight from 10 pounds to 20 tons. (This Bourdon is the heaviest in the world and uniquely reaches an octave lower than any other instrument of its kind.) Lind explains the bells and plays the carillon in this 2011 video by Allison Davis, published by by the New York Daily News.

Roberta Mandel (29 December 1920 - 5 September 2017) performed as a jazz pianist for 75 years. She was also an arranger and composer. She had a special gift for transcribing by ear the arrangements she heard on recordings. She credited her extensive knowledge of harmony to her early studies of classical music (in which she earned two academic degrees from the California State University at San Francisco). Her arrangements of big-band numbers for solo piano were especially noted. Mandel was raised in San Francisco. Her first teacher was her mother, a pianist.

Mandel's longest engagement (32 years) was with the 18-member Junius Courtney Big Band, which was similarly noted for its arrangements. Mandel is the rightmost figure in the Big Band photo (2011). A frequent venue was the Freight & Salvage Coffeehouse in Berkeley. Freight & Salvage, which offers open nights for jazz improvisation, celebrated its 50th anniversary in 2018.

Among her credits, Mandel was the first female pianist to sit in with Count Basie's band. Her 1982 transcription of Billy Strayhorn's "Blood Count" from the recording by Duke Ellington's Orchestra is preserved in the Smithsonian (National Museum of American History). No copies of her book of compositions, Jazz Tunes for Friends (2001), are publicly accessible. This memoir from Jazz Now appeared in 1990.